More Lamington history as the search for its origins continues 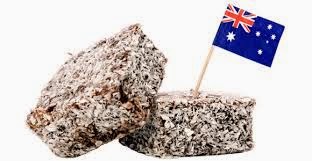 I have lately heard from a kind reader in Brisbane, Kerry Raymond, who with exquisite tact provides valuable new information about the Edwardian and vice-regal origins of the lamington, that staple of the Australian afternoon tea table. With her permission, I am delighted to provide particulars.

The earliest reference to the lamington, roughly coinciding with the relinquishment of the Government of Queensland by Lord Lamington, and his departure with Lady Lamington and their children from Brisbane on June 20, 1901, comes in the women's section of the Queenslander the following December 14, where "Native Born" inquires:

"Have not heard of a recipe for 'Lamington cake.' Can you give some clue to the appearance and ingredients of the cake?"

This cri de coeur suggests that by the end of 1901 word of the discovery had spread some considerable distance and generated much interest, although the delicacy had evidently not been sampled or even much seen outside Old Government House, where Lord and Lady Lamington's chef de cuisine, M. Armand Galland, presided over the catering arrangements—although I see that one account of the second vice-regal ball of the season that was given by the Lamingtons in August 1899 explicitly mentions that "all the dainties so lavishly provided for the supper were prepared under the supervision of Government House chef de cuisine Mrs. Jones," so I am not quite sure where this leaves us.

Anyhow, after the hiatus of Christmas and the New Year, on January 4, 1902, so prompted by "Native Born," the Queenslander furnished the following recipe:

"Lamington Cake (from a Subscriber). The weight of two eggs in butter, sugar, and flour, two eggs, half-teaspoonful of baking powder. Beat the butter to a cream, add the sugar and yolks of eggs, one by one, then the whites beaten stiff, lastly add gradually flour and baking powder. Bake in a moderate oven. When cold cut the cake like a sandwich and put the white mixture between, then cut into small pieces and cover on all sides with the chocolate mixture. Dip the cakes into grated cocoanut and put in a cool place. The Mixture.—2 oz. butter, 6 oz. icing sugar, beat to a cream, and divide equally in two basins, and to one half add one and a half teaspoonful cocoa (to be had in small tins) dissolved in three teaspoons boiling water. Beat well."

There is a commonsense air to these instructions that points to a colonial mastermind, and not so much to the specialist patissier temporarily transplanted to the tropics, even one searching for new and exciting, even flamboyant uses for grated coconut, so if pressed I would hazard a guess that the canonical lamington (with filling) was the brainchild of Mrs. Jones and perhaps not M. Galland.

It seems certain, meanwhile, that unlike the pavlova, New Zealand's premier cultural export, the lamington is a bona fide Australian discovery, now satisfactorily documented to not later than 1901, the year of Federation.

Thanks for sharing this blog...
caterers toowoomba