The death of the Lamington

LONDON, September 17. - The death occurred this morning of Lord Lamington, a former Governor of Queensland (from 1895 to 1901), and later Governor of Bombay.

He was 80 years of age. Lord Lamington was one of three men injured when an Indian shot Sir Michael O'Dwyer dead at a meeting of the East India Association in the Caxton Hall, London, on March 13.

Lord Lamington, whose right hand was partly shattered, was taken to a hospital, but left for home after receiving treatment. 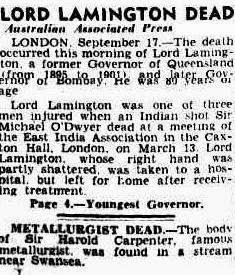 
LORD LAMINGTON, whose death in his 81st year has been reported by cable message, was the eighth Governor of Queensland - the youngest Governor this State has had.  He was not quite 36 years of age when he arrived here with a young bride in April, 1896. His son, the Hon. Victor Brisbane Cochrane-Bailley, who succeeds as third Baron, and his daughter were born in old Government House, now the University.

Many old Brisbane residents will remember having seen the small children with their mother or a nurse in the Botanic Gardens, particularly around the ponds, then the haunt of wild ducks and other aquatic birds.

Though Lord Lamington was a young man when he was Governor he was an accomplished constitutional authority, a qualification especially necessary in those stormy days of politics, when Sir Thomas McIlwraith and Sir Samuel Griffith were the veteran political protagonists, and Hugh Nelson, James R. Dickson, Horace Tozer, Arthur Rutledge, and Robert Philp (all to be knighted subsequently), Anderson Dawson, William Kidston, and Andrew Fisher were coming men, all to be prominent later, all in State politics, and some in Federal.

Before coming to Queensland, Lord Lamington had been private secretary to Lord Salisbury when he was British Prime Minister. His father, the first Baron, had been closely associated with Disraeli; and it is generally understood that he was the original of "Buckhorst" in Disraeli's novel,"Coningsby."

After leaving Queensland in 1901 Lord Lamington went to Bombay as Governor and subsequently settled on his estates in Lanarkshire in Scotland. About 18 months ago he intended making a trip to Queensland, but was prevented because of the uneasy state of Europe at the time.

Lord Lamington was devoted to outdoor exercise. He was a first-class cyclist when he was in Brisbane, an excellent walker, and a keen polo player. His favourite sports, however, were shooting and fishing, of which he was passionately fond. His name is commemorated in the Lamington National Park, beyond Beaudesert.

Lady Lamington, subsequently a Lady of the Bedchamber to Queen Mary, took considerable interest in social movements in Brisbane. Until recently her name was commemorated in the old Lady Lamington Hospital,now used for military purposes. 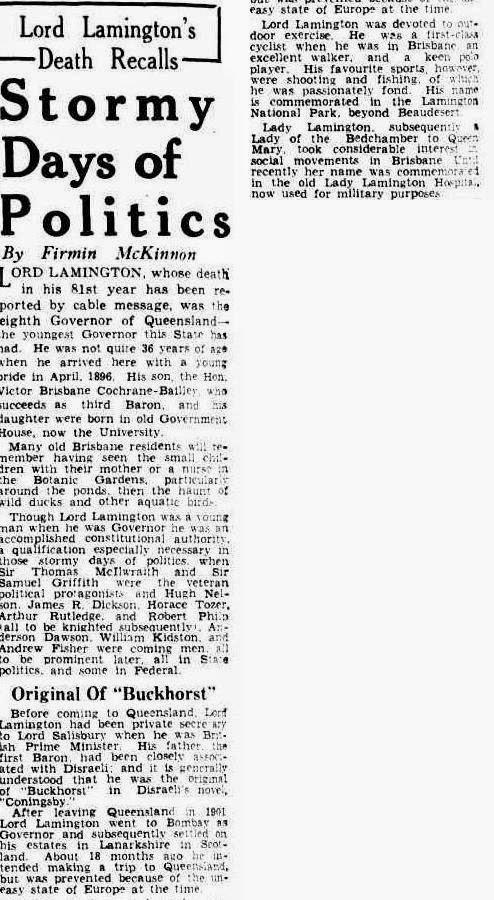