Who invented the world-famous Lamington? - A thickening plot! 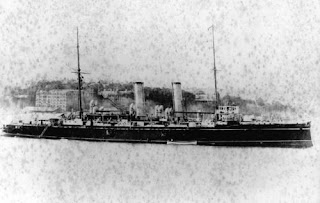 Upon further reflection overnight, it seems to me that the lamington could easily have been invented, along with other “dainties,” by Lord and Lady Lamington’s sometime chef de cuisine Mrs. Jones (who was apparently still en poste in August 1899), or else by her successor, the Frenchman Armand Galland, whom they poached from Admiral Pearson after 1898.

If, as seems to be the general consensus of opinion, we accept the latter view, some clarifying flecks of detail emerge from the brief obituary for Mrs. Cladie Galland, which appeared in the Brisbane Courier-Mail on Saturday June 23, 1934, a notice that bleakly adheres to the bad old habit of talking almost entirely about the subject’s late husband (who died in September 1923 and is buried in the South Brisbane cemetery), and hardly at all about the lady herself:

“Mrs. Cladie Galland, who died in the Mater Misericordiae Hospital last night, was the widow of the late Mr. Armand Galland, well-known in Brisbane as a chef and wine merchant."

Mrs. Galland was born in France 68 years ago, and came to Australia in 1897[–98] with her husband, who was then chef to (Rear-)Admiral (Hugo Lewis) Pearson (Commander-in-Chief of the Australian station), in the Royal Arthur (the “Australian” flagship above).

Mr. Galland afterwards became chef to Lord Lamington, Governor of Queensland, but later founded the wine business in Melbourne Street, South Brisbane, at present conducted by his son, Mr. Marcel Galland. During the visit of the present King (George V), then Duke of (Cornwall and) York, to Australia [to open the Federal Parliament in Melbourne, May 1901], Mr. Armand Galland acted as his chef, and went to New Zealand with the Royal party. Mr. Galland also acted as chef for the Prince of Wales during his visit to Queensland (in July 1920). Mrs. Galland leaves one son, Mr. Marcel Galland.”

What the Courier-Mail does not mention is that after the departure of Lord and Lady Lamington in 1901 and M. Galland decided to go freelance -

Ultimately switching to the wine and spirits business in Melbourne Street, M. Galland was some years later (in August 1906) convicted of Sunday trading in the South Brisbane Police Court, and fined £2, with 4s 6d costs. This presumably reflected a degree of Gallic contempt for the local licensing laws.

If M. Galland had in fact invented the lamington, or claimed credit for it, it is hard to imagine that hugely important detail being omitted from his widow’s obituary, or any ambitious post-Government House advertorial. In 1902 we find him serving as an examiner in cookery at the Technical College (“late chef de cuisine to his Excellency”).

In July 1906 we find him catering for the Children’s Hospital Benefit Euchre party in the Protestant Hall, and between 1907 and 1909 he evidently enjoyed a cosy relationship with Rex stoves:

“In connection with the late Austral Festival (in Toowoomba) it is announced that Monsieur Galland, adjudicator for the cookery competition, expressed himself highly delighted with the Rex stove used by the competitors”

Perhaps M. Galland regarded the lamington as beneath his dignity. Certainly we need to know more about the relatively unsung Mrs. Jones.