Origin of the Australian Lamington 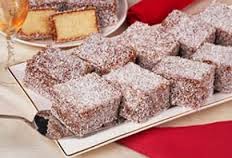 The lamington is named after Charles Wallace Baillie or Charles Cochrane-Baillie, 2nd Baron Lamington, who served as Governor of Queensland from 1896 to 1901.

Stories vary as to how it actually originated.

One of the stories surrounding the origin of the lamington is that Lamington's cook developed the cake as a means to use up leftover sponge cake.

According to another account, the dessert resembled the homburg hats favoured by Lord Lamington.

Another account again tells of a banquet in Cloncurry during which the governor accidentally dropped a block of sponge cake into a dish of gravy, and then threw it over his shoulder, causing it to land in a bowl of desiccated coconut.
A diner thought of replacing the gravy with chocolate and thus created the lamington known today.

Another account states that lamingtons were first made at Harlaxton House in Toowoomba, Queensland in the summer of 1896 for Lord Lamington, Governor of Queensland and his guests at afternoon tea. Lord Lamington requested that the cook prepare snowballs, round cakes that are served with whipped cream.

When the cook found that the kitchen lacked the correct cake tins and there was no cream, she prepared a large cake cut it into cubes, iced them with chocolate, rolled them in desiccated coconut and served them instead.

This unusual treat proved to be a big hit with the guests. The guest asked Lady Lamington what the cakes were called, and when they were told they had no name they were named 'Lord Lamington Cakes'.