Australia: The tale of Baron Lamington and an improvised cake 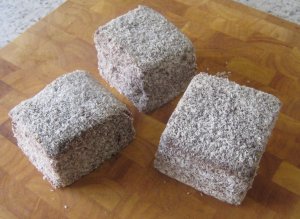 But as Governor of Queensland from 1896 to 1901, m'lord upset ecologists by killing a koala, while lamington cakes turned out to be not to his taste at all.

The stories resurfaced recently when the Binna Burra Mountain Lodge, in Lamington National Park 75km south of Brisbane, opened its new Teahouse licensed cafe, replacing one that was destroyed by fire in 2005.

To celebrate the occasion, chef Ben Taylor produced what was hailed as the world's biggest lamington, a block of sponge cake coated with chocolate icing and dessicated coconut.

It measured 50cm high by 75cm long, which Taylor said was about 16 times the size of the cakes served in the Teahouse.

He used 32 cups of flour, 16 cups of icing sugar and a kilogram of coconut.

Queensland Tourism Minister Margaret Keech pronounced it a fine example of her favourite cake, and Binna Burra staff began talking about an entry in the Guinness Book of Records.

The story goes that, while visiting Harlaxton House in Toowoomba, the Governor had unexpected guests at teatime. The cupboard was bare apart from a stale sponge cake, so he asked the chef to improvise.

The chef chocolate-coated the sponge cake, cut it into 5cm squares and added shredded coconut because it was sticky. The result was the lamington, which he named after his vice-regal boss.

Although some reports say Lord Lamington approved of the taste (as did millions of Australians), he was reported to have referred to the cakes later as "those bloody poofy woolly biscuits".

Lord Lamington left a bad taste in everyone's mouth when Governor, by slaying a koala.

Invited to Binna Burra in 1899 by conservationists pushing for a national park, he had just begun his journey back to Brisbane when he ordered his carriage to stop: he had spotted a koala asleep high in a roadside tree.

Then he reached for his rifle, let loose one shot and it fell to earth dead, to the horror of his hosts.

One obituary of Lord Lamington referred to him as "an enthusiastic hunter", but this wasn't a deer in the Scottish Highlands whose antlers would be mounted over his fireplace.

You don't go around slaying a cuddly Australian icon (not declared a protected species until 1937), especially when you're a guest of conservationists.

The Governor later acknowledged his tragic mistake, saying remorsefully that the koala's "dying cries were terrible ... They haunted me for years".

Despite, or perhaps because of, the koala's death, Lord Lamington gave his support for Queensland national parks and what became Lamington National Park was declared a protected area in 1913.

What happened to the dead koala is not recorded.