Australian Icon: The Lamington - a long and controversial history 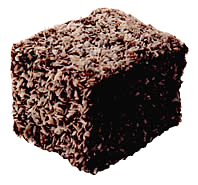 When my daughter started a school project on Lamingtons as part of their discussion of Australian icons I had no idea of the controversy of which she was to become a part. History, we know, is written by the victors and it seems the lamington has a past clouded by hearsay and convenient recollection.

The Lamington regularly finds its way to lists of Australian icons alongside the Sydney Harbour Bridge, the Kangaroo, Vegemite and the meat pie. For much of the last 100 years it has been a popular addition to any “bring a plate” event, although in recent years it is more likely to be store bought than made at home.

Much of the Lamington’s iconic status probably derives from its suitability for our climate as sponge cake lasted much longer in the heat when it was iced in bite-sized squares and covered in coconut; and it also became a staple at fundraising events (known as Lamington Drives) where it could be made easily in large quantities.

The Lamington’s origins, however, are quite cloudy. The Lamington is not only claimed by Australians as a popular dish but also by New Zealanders (as the Lemmington, or Leamington) and by the Scots. It is most likely that the name derives from either Lord or Lady Lamington. Lord Lamington was the Governor of the State of Queensland from 1895-1901.

The most popular story is that a kitchen maid of Lord Lamington accidentally dropped some sponge cake into some chocolate icing and then rolled it in coconut to stop it from being too sticky to handle. However, some further research by Australian authorJackie French unearthed a story that it was invented in the early 1900s by a Queensland cooking teacher, Amy Shauer, and that they were named after the cooking school’s patron – Lady Lamington.

Recipe books written before 1910 describe the Lamington as a whole cake iced in chocolate and coconut rather. Bite-sized lamingtons didn’t appear in cookbooks until a few years later, giving more impetus to the Lady Lamington story over the Lord Lamington one.

Historians before our time were apt to attribute discoveries to the most senior person on an expedition or a local government official so perhaps the common attribution of the this iconic cake to Lord Lamington rather than Lady Lamington is just another example of this practise.

I think we will never know the true history of the lamington, although I’m quietly cheering for the Lady Lamington story. Perhaps you have a different lamington story?

Or perhaps the Scots and New Zealanders out there would like to weigh in with a completely different history?